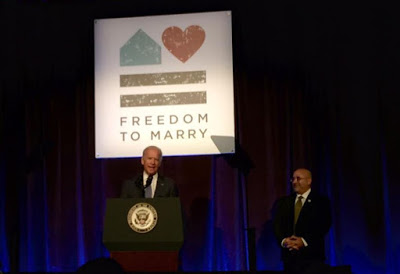 NEW YORK: Biden Celebrates At Freedom To Marry’s “Going Out Of Business” Gala

Vice President Joe Biden led a raucous reception for marriage equality Thursday night at Cipriani Wall Street in lower Manhattan. The gala, celebrating the June 26 Supreme Court decision that made same-sex marriage legal in all 50 states, was thrown by Freedom to Marry, an advocacy group that has fought for same-sex marriage since 2003. “This has been a heroic battle,” Biden told the crowd of elected officials, community leaders, advocates and celebrities. A spokesman described the event as “the biggest celebratory event honoring the freedom to marry nationwide” and “a ‘going out of business’ party” for the organization.

Evan Wolfson, the founder of Freedom to Marry, worked for Biden in the 1970s when Biden was a senator. The vice president has long been a supporter of gay rights and attributed his stance on the issue to his father. Biden recalled a moment when he was 17 and he and his father saw two men kissing. “He said ‘Joey, they love each other. It’s simple,’” he said, quoting his father. “That’s what it’s been about from the beginning. It’s never been that complicated for me.” But Biden also cautioned that although same-sex couples are eligible for federal marriage benefits nationwide, 32 states don’t have anti-discrimination employment laws protecting sexual orientation.

Biden departed the stage to a thunderous ovation and then spent a few minutes shaking hands and posing for photos. (I couldn’t get near him.) Musical entertainment followed with Hedwig Tony winner Lena Hall and pop star Carly Rae Jepson. It was quite the celebration but all were especially appreciative that Biden repeatedly stressed the work that still needs to be done. Related to that, I cornered Freedom To Marry leaders Evan Wolfson and Marc Solomon to ask what is next for them personally. Both said they didn’t know, but I suspect we’ll soon see them take roles in the still-forming battle for federal anti-discrimination protections.

RELATED: There was some buzz in the crowd that Biden might surprise us with a presidential announcement last night, but he made no mention of the 2016 election.

Previous Tired Old Queen At The Movies #134
Next New Chris Christie Campaign Ad: I’m Not Looking To Be The Most Popular Guy