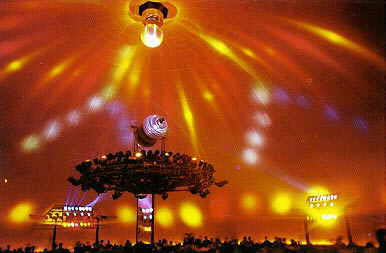 From September 1980 to May 1988, The Saint defined gay nightlife in New York during its most tumultuous and literally plagued decade. Conceived by off-Broadway impresario Mailman, who had just scored a runaway success with The New St. Marks Baths, The Saint set such high standards that it soon rendered its competition redundant.

“When it opened, it just sucked the life out of all the other clubs,” says Robbie Leslie, the most popular of the disco’s surviving DJs. “Everyone abandoned these clubs they professed loyalty to. It only took a week or two, and they just flocked over to The Saint.”

Housed in the three-story former site of the psychedelic rock concert hall Fillmore East, The Saint offered multi-sensory pleasure like no other venue before or since. It featured a circular, 4,800 square foot dancefloor topped by an aluminum dome 76 ft. by 38 ft. under which much of the club’s 1,500 lights would shine, as well as constellations from a Spitz Space System projector ten times brighter than one in a typical planetarium. Designed by architect Charles Terrell, The Saint pointedly directed one’s attention skyward. Its experience was clearly meant to be uplifting – visually and otherwise.

The perforated dome hid the last and largest of the revered Graebar sound systems: Powered by 630 drivers and 32 amplifiers, nearly 500 speakers generated 26,000 watts – a figure touted in The Saint’s publicity materials as being “probably the most powerful per square foot for entertainment purposes in existence.” All this splendor ultimately cost $4.6 million in 1980 dollars – well over $13 million in today’s currency.

You don’t have to be an eldergay to enjoy the full piece.

AUDIO: There are many recordings of Saint DJ sets floating around. In the above-linked piece Walters includes this set from closing night DJ Jim Burgess.