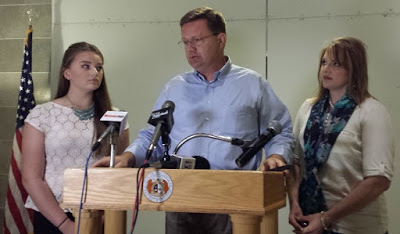 Missouri state Sen. Bob Dixon, who claims to be “ex-gay,” has announced his bid for governor.

He didn’t elaborate at the time, but it’s been a long journey up to this point for Dixon, 46, who reportedly once lived as a gay man until a spiritual epiphany turned him straight. Dixon himself spoke about his history with homosexuality at a Springfield city council meeting in 1991, according to a report in the Springfield News-Leader. Then in his early twenties, Dixon claimed that he’d lived as homosexual for five years until an undefined “religious experience” in October, 1988. Dixon’s mother, former state representative Jean Dixon, told the newspaper that her son’s “struggles” with homosexuality nearly led him to suicide that same month. Her son’s ordeal, she said, informed her opposition to Missouri State University’s 1989 production of The Normal Heart, a play that deals unflinchingly with the AIDS crisis. “It had been a heartache I had to deal with, and it was a tough one,” Jean Dixon told the News-Leader of her son’s gay lifestyle.

According to the Missouri Times, Dixon is willing to consider a bill to include LGBT citizens in anti-discrimination laws. Dixon: “I think the wise thing to do about any legislation is to wait until I see it before me. I think it’s a sad day when we have to have laws to tell us to treat people with respect.”

RELATED: Democratic Missouri Gov. Jay Nixon will be term-limited out of office next year. Attorney General Chris Koster, also a Democrat, is considered the front-runner.