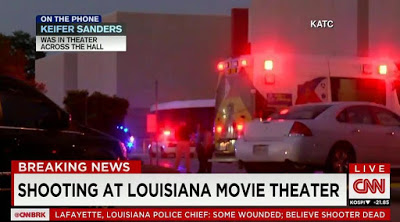 A gunman fatally shot at least one person and injured eight others at a movie theater in Lafayette, Louisiana, before killing himself on Thursday, according to police and local media. NBC News reported that one person died and eight others were wounded at the Grand Theatre in Lafayette before the gunman took his own life. Those reports could not immediately be confirmed by Reuters, but Lafayette police said in a tweet that they were “working a shooting at the Grand Theater on Johnston Street” and that it involved multiple victims. The local Advertiser newspaper reported that the gunfire broke out during a 7 p.m. showing of the film “Train Wreck”. Witness Katie Domingue told the paper that the gunman was an older white man who stood up in the theater and began shooting. “He wasn’t saying anything. I didn’t hear anybody screaming either,” Domingue said.

It was three years ago this week that James Holmes murdered 12 and injured 70 in a mass shooting at a movie theater in Aurora, Colorado.