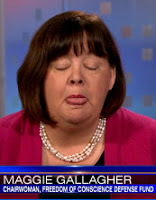 Maggie Gallagher Has The EEOC Sadz

“On Friday, the Equal Employment Opportunity Commission made a remarkably lawless decision: it unilaterally added ‘sexual orientation’ to the Civil Rights Act of 1964, something wholly unjustified by the text, by the history, or by the plain meaning of the statue, hijacking the civil rights movement in a profound new way. Everyone knows the Civil Rights Act of 1964 does not include sexual orientation. Even the gay rights movement knows it, because they proposed adding employment discrimination by statute, the Employment Non-Discrimination Act (ENDA), and even adding sexual orientation to the ’64 Act. Now, unless Congress acts, every religious school, charity, and parachurch organization must hire openly gay people, or face potential backbreaking litigation. Will Kennedy overturn this ruling? Don’t count on it. Will Congress pass a law against it, clarifying the Civil Rights Act of 1964 means what it says? Don’t count on that either.” – Maggie Gallagher. (Tipped by JMG reader Christopher)