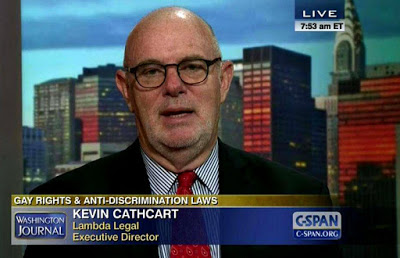 “I am proud of what we have accomplished together and the work will not stop over the next 10 months or the decades ahead. Our community deserves our best efforts, addressing the discrimination, violence, and inequality we still face. I plan to keep us moving forward until my last day at Lambda Legal and I have every confidence in the organization’s staff and volunteer leadership — as well as in the next generation of leaders. As with any major transition, this is an opportunity for Lambda Legal to look toward the future and continue building the capacity of the organization.” –   Kevin Cathcart, announcing his retirement in 2016 after 24 years as Lambda Legal’s executive director.

More from their press release:

Cathcart is considered by many to be the ‘dean’ of LGBT leaders, as the longest serving head of a major national LGBT nonprofit. Before coming to Lambda Legal, he served from 1984 to 1992 as the executive director of Gay & Lesbian Advocates & Defenders (GLAD) in Boston, New England’s LGBT and AIDS legal organization. In all, Cathcart has been the Executive Director of a major LGBT and HIV legal rights organization for 32 years, a time period which encompasses most of the historic victories and advances of our movement. At Lambda Legal, he led the strategy to finally eliminate state anti-sodomy laws that criminalized sexual relations between consenting adults of the same sex, leading to the thrilling and game-changing 2003 Supreme Court victory in Lawrence v. Texas.

While Lawrence and Obergefell were the most historic rulings secured during Cathcart’s career, there have been many others that have built the jurisprudence we now rely on: Cammermeyer v. Perry (1994), successfully challenging the removal of a lesbian officer from the military; Nabozny v. Podlesny (1996), finding schools liable for failing to protect gay students from harassment; Romer v. Evans (1996), a Supreme Court victory making clear that antigay sentiment is not a valid basis for laws; Varnum v. Brien (2009), a unanimous ruling by the Iowa Supreme Court in favor of marriage equality; and Glenn v. Brumby (2011), a federal appeals court ruling that Georgia violated the Constitution when it fired an employee because she is transgender.