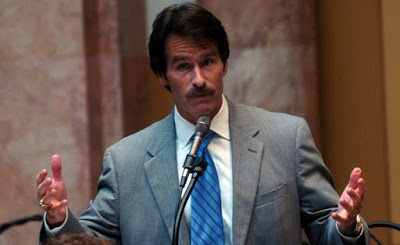 Via the Louisville Courier-Journal:

Two Republicans in the Kentucky House are sponsoring a bill for the 2016 legislative session that would clear the way for county clerks to deny same-sex marriage licenses based on religious beliefs. Rep. Stan Lee [photo], R-Lexington, and Rep. David Meade, R-Stanford, announced the legislation Wednesday in response to the recent U.S. Supreme Court ruling that legalized same-sex marriage nationwide. The lawmakers issued a press release saying the measure would create a new section of law “protecting county clerks from liability” if they refuse licenses on religious grounds. Another portion of the legislation seeks to “protect ministers and churches from civil and criminal liability” for declining to marry same-sex couples. However, no one has tried to force religious leaders to perform the marriages in Kentucky, and many experts who have weighed in on the ruling say it does not impact a minister’s discretion in the matter.

The Kentucky legislature doesn’t reconvene until January. On Monday the ACLU’s lawsuit against Rowan County Clerk Kim Davis is expected to resume. Clerks face the possibility of being jailed for contempt if they refuse the court’s order to issue licenses. More about the next session: