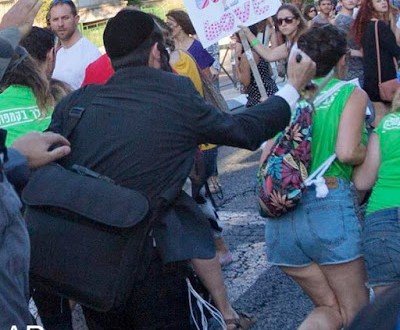 JERUSALEM: Pride Attacker Had Been Calling On All Jews To Prevent The Parade

An update from Haaretz:

Yeshai Schlissel was sentenced for 12 years in prison for the 2005 attack after his conviction on charges of attempted murder and aggravated assault. However, in 2007, following an appeal, the Supreme Court mitigated his sentence to 10 years. After his release, Schlissel returned to his hometown, where residents said that he distributed hand-written pamphlets in which he called on “all Jews faithful to God” to risk “beatings and imprisonment” for the sake of preventing the parade.

The Judea and Samaria Police District said after the attack that they were not supposed to track Schlissel after his release, even though he resides in their jurisdiction, because his crime was perpetrated in the Jerusalem district. Jerusalem District Police chief Moshe Edry said police didn’t have concrete intelligence that Schlissel was in the area of the parade. “We were prepared for every scenario, but our perimeter was breached. This is a severe, hard incident, which required us to investigate to find out what fault cause this breach,” he said.

Benzi Gopstein, chairman of the right-wing group Lehava, said that while activists from his organization staged a protest against the “abomination parade,” they “oppose the stabbing of Jews.” He called on the police not to allow the parade to take place in Jerusalem again.

Police had granted a permit to 30 right-wing activists to protest against the event near the Great Synagogue, not far from the marchers. Earlier on Thursday, Israel Police arrested right-wing extremist Baruch Marzel though they denied the arrest had anything to do with the city’s annual Gay Pride Parade. Marzel is a member of the far-right Otzma Yehudit party and usually takes part in the annual protest against the parade.