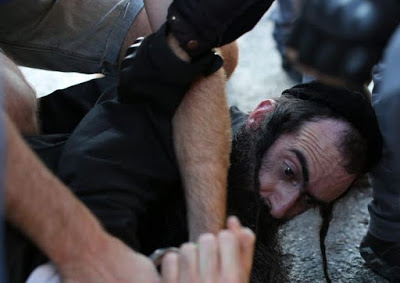 Jerusalem Magistrate’s Court extended the remand of Yishai Schlissel for an additional 12 days on Friday, after he allegedly stabbed six participants in the city’s Gay Pride Parade on Thursday. Schlissel – an ultra-Orthodox Jew who had served 10 years in prison for an identical attack in 2005 – refused to accept the court’s jurisdiction and represented himself at the hearing. “I do not accept this court’s authority. This court does not follow the rules of the holy Torah,” Schlissel said at the hearing. “This court is part of the mechanism of evil. I have no interest in cooperating at all. I do not recognize any of the regime’s institutions.”

Judge Chana Miriam Lomp ruled in favor of the police’s request for extending Schlissel’s remand, citing the danger he posed to society, the severity of the crimes attributed to him and his past offenses. After stabbing three people at the Pride Parade a decade ago, Schlissel, then 40, from Modi’in Ilit, was convicted of attempted murder and aggravated assault. He was sentenced to 12 years in prison for the 2005 attack. However, in 2007, following an appeal, the Supreme Court reduced his sentence to 10 years.

Israeli police said late yesterday that they will conduct an internal probe into their failure to protect parade participants.

Since being released from prison, Jerusalem District Intelligence flagged Schlissel as someone who was liable to act against members of the gay community. However, these intelligence assessments did not specifically refer to Schlissel targeting this year’s parade. The Israel Prison Service informs the police about prisoners who complete their sentences or are released on furlough using a computerized system. The system is updated every eight hours and provides general information. It was put in place primarily to alert the police to the release of abusive husbands who may seek to attack their wives again.

The police’s intelligence coordinators are therefore aware when inmates go free. But if the convicts aren’t identified as dangerous, no one is assigned to analyze their data and ask the important questions: Did they undergo a process of rehabilitation? Did they express regret over their crimes? Are there signs that point to the likelihood that they will resume criminal activity? Schlissel appears to have announced his intentions in leaflets distributed in his hometown of Modiin Illit shortly before the event, residents said.

Police had been told to be on the alert for Ultra-Orthodox men “masquerading” as secular Israelis, yet Schlissel had been allowed to freely enter the parade in his full Haredi outfit.