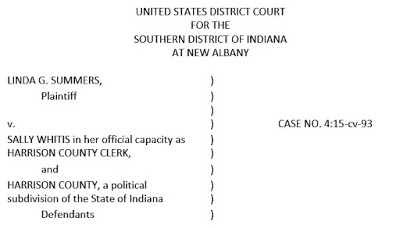 Former Harrison County, Indiana employee Linda Summers has filed a federal employment discrimination lawsuit against her former boss and the county, alleging religious discrimination after being terminated last year for refusing to issue same-sex marriage licenses. Summers logically cites Leviticus as proof of her having been wronged:

Plaintiff, Linda Summers has a sincerely held religious belief, based upon the tenants of her faith and biblical teaching, such as Leviticus 18:22; Romans 1:26-27, I Cor. 6:9-10; and I Tim 1:9-10, that it is a sin for persons of the same sex to engage in sexual relations and, based upon Genesis 2:18-25, and other biblical authority, that persons of the same sex cannot and should not be morally or legally recognized as husband and wife, and that God will judge individual Christians, as well as the society of which they are a part, who condone or institute same sex marriages.

Bolding is mine. Summers goes on to cite the Civil Rights Act of 1964. She is represented by a local firm. (Via World Net Daily)

Previous TRAILER: Back On Board: Greg Louganis
Next Today’s Lies From David Barton