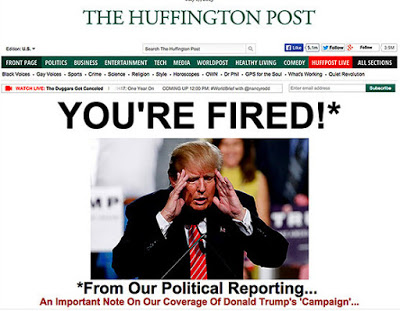 The Huffington Post will continue to cover Donald Trump, but the popular news site is done treating him like a legitimate presidential candidate. In a note to readers on Friday, two top editors for HuffPost said that coverage of the brash billionaire’s campaign will be a part of the site’s entertainment section. “Our reason is simple: Trump’s campaign is a sideshow,” wrote Washington bureau chief Ryan Grim and editorial director Danny Shea. “We won’t take the bait. If you are interested in what The Donald has to say, you’ll find it next to our stories on the Kardashians and The Bachelorette.” In a separate statement, Grim said that the site had “erroneously been covering [Trump] as an actual presidential candidate.”

The teabaggers are ever so pissed.

Previous Carly Rae Jepsen – Run Away With Me
Next Trump Vs HuffPo: Part II