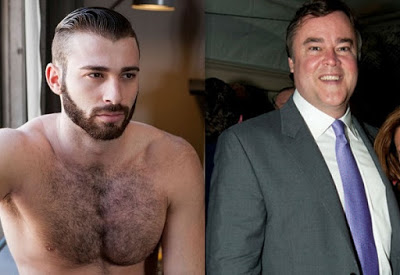 A Florida-based tycoon was identified as the target of an alleged $1.5 million extortion attempt by a gay porn actor during the first day of the actor’s criminal trial. Taking the stand Tuesday afternoon in U.S. District Judge’s John Walter’s courtroom, Donald Burns of Palm Beach said he paid defendant Teofil Brank $1,500 to $2,500 each time the actor referred him to male models and adult performers. He said he also paid to have sex with Brank at least four times. “It was partly a coping mechanism from the loss of my long-term relationship,” Burns said in response to a prosecutor’s question why he had paid Brank to help set him up with the men.

The Smoking Gun website in April identified Burns as the alleged victim in the federal government’s case. But Burns, who jurors heard is worth close to $140 million, successfully moved to have his identity kept secret until trial. The businessman has a stake in Internet phone company Magicjack Vocaltec. He was a co-founder of the Telco Communications Group and controls the Donald A. Burns Foundation. Brank, who performs as Jarec Wentworth, was charged in March with extortion and making criminal threats after the FBI arrested him in a sting at a Starbucks parking lot in El Segundo. Federal prosecutors say Brank extorted Burns and threatened to ruin his reputation by posting sexually explicit photos on Twitter.

While Burns has been characterized by some outlets as major GOP donor due to his support of Mitt Romney, Jeb Bush, Rudy Giuliani, and other top Republicans, he has also supported the Gay & Lesbian Victory Fund and donated $400,000 to Florida Red & Blue, the group formed to battle 2008’s ultimately successful Amendment 2, which placed a ban on same-sex marriage into the state constitution. Burns reportedly went to the FBI when Brank demanded an additional million dollars after having been paid $500,000 and given an extremely expensive Audi R8. There’s no mention of Burns being closeted at the time of the alleged extortion. Brank performed under the name Jarec Wentworth.