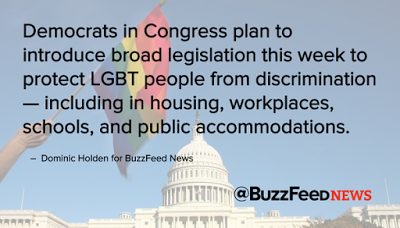 Via Chris Johnson at the Washington Blade:

A highly anticipated bill that would explicitly bar anti-LGBT discrimination in all areas of civil rights law is set for introduction in both chambers of Congress on Thursday, the Washington Blade has learned. Capitol Hill sources said lead sponsors Rep. David Cicilline (D-R.I.) and Jeff Merkley (D-Ore.) will introduce the legislation on Thursday and hold a news conference at noon on the legislation on the Senate side of the U.S. Capitol. According to a “Dear Colleague” letter dated July 20 and obtained by the Washington Blade, the legislation intends to prohibit anti-LGBT discrimination in seven areas: credit, education, employment, federal funding, housing, jury service and public accommodations. The name of the legislation is the Equality Act, which is the same as legislation introduced more than 40 years ago by the late Rep. Bella Abzug of New York City. The bill, which was the first-ever gay rights measure introduced in Congress, would have amended the Civil Rights Act of 1964 to include sexual orientation.

More from Dominic Holden at Buzzfeed:

Provisions of the bill to ban discrimination in places of public accommodations may draw the most scrutiny, and elevate local debates over faith. Religious freedom bills in Indiana and Arkansas became national lightning rods this spring, raising disagreement about whether business owners selling cakes or flowers to same-sex couples who are marrying compromised the moral rights of Christians. But Allison Steinberg, a spokeswoman for the American Civil Liberties Union, which advocates for LGBT rights and religious liberties, argues this should be an open and shut issue. “Open for business means open for all,” Steinberg told BuzzFeed News. “A public serving business owner can’t turn someone away because of their race, color, religion, sex, or national origin, nor should they be allowed to deny someone service because of their sexual orientation or gender identity.”

The bill is expected to see little traction in either GOP-controlled chamber.