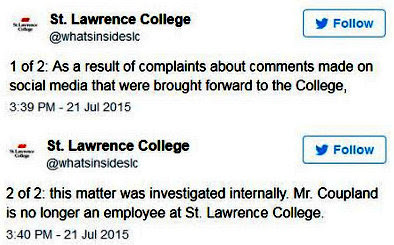 CANADA: College Professor Fired After Saying “Queers Should Be Hanged”

An Ontario college announced one of its professors “is no longer an employee” at the school after he allegedly posted a homophobic comment on Facebook. St. Lawrence College said it had received a complaint about the recent comment that business professor Rick Coupland allegedly posted on Facebook. Spokeswoman Kelly Wiley called the comment “deeply concerning.” “As a result of complaints about comments made on social media that were brought forward to the College, this matter was investigated internally. Mr. Coupland is no longer an employee at St. Lawrence College,” the school tweeted on Tuesday. Screenshots of an alleged post by Coupland circulating on social media purport to show him sharing a link to a story about a rainbow flag being raised in St. Petersburg, Fla., accompanied with the comment, “It’s the queers they should be hanging, not the flag.”