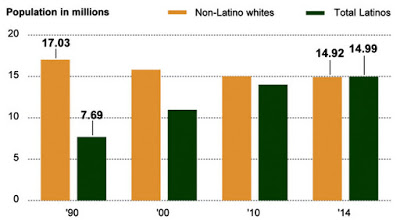 The demographers agreed: At some point in 2014, Latinos would pass whites as the largest ethnic group in California. Determining when exactly that milestone would occur was more of a tricky question. Counting people isn’t like counting movie ticket receipts. The official confirmation had to wait until new population figures were released by the Census Bureau this summer. The new tally, released in late June, shows that as of July 1, 2014, about 14.99 million Latinos live in California, edging out the 14.92 million whites in the state. The shift shouldn’t come as a surprise. State demographers had previously expected the change to occur sometime in 2013, but slow population growth pushed back projections. In January 2014, the state Department of Finance estimated the shift would take place at some point in March. Either way, the moment has officially arrived. California is now the first large state and the third overall — after Hawaii and New Mexico — without a white plurality, according to state officials. The country’s Latino population is now 55.4 million. California and Los Angeles County have the largest Latino populations of any state or county in the nation, according to the new figures.

For some reason Breitbart has illustrated their anger about the report with a photo of a very buff wrestler.