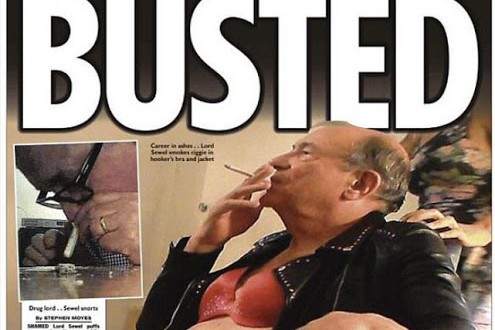 Parliamentary authorities have called in Scotland Yard after a peer who oversees standards in the House of Lords was pictured allegedly taking cocaine with two prostitutes. Baron Sewel of Gilcomstoun, a Deputy Speaker of the Lords, resigned amid claims he took the Class A drug at a sex party. The House of Lords authorities immediately referred his case to police and dubbed the revelations “shocking and unacceptable”. Lord Sewel, formerly a Labour peer and ally of former Prime Minister Tony Blair, was said to have been caught on video telling the £200-a-night prostitutes that he wanted to “be led astray”. The Lord Speaker issued a strongly-worded statement in which she said Scotland Yard would be asked to investigate. Baroness D’Souza said: “Today’s revelations about the behaviour of Lord Sewel are both shocking and unacceptable. “Lord Sewel has this morning resigned as Chairman of Committees. The House of Lords will continue to uphold standards in public life and will not tolerate departure from these standards”

While Sewel has resigned from his post as deputy speaker, he remains a member of the House Of Lords. For now. More from the Guardian:

He paid women in prostitution for their services in a grace and favour flat in Dolphin Square for which he pays £1,000 a month instead of the going rate of nearly £3,000. This man’s “private life” is subsidised to the hilt by the taxpayer, and that is what really sticks in the craw. That, and his comments about Asian women. He asks if there will be any “nice little young Asian women” at the party, before adding, “they sort of look innocent but you know they are whores”. As he was the guy in the Lords responsible for making sure that his colleagues, his fellow public servants, behaved properly, the notion of “double standards” covers him much less impressively than that unfortunate bra. His awful moaning to the women who charged him £200 a night about how he can’t get by on a Lords allowance of £200 a day is the worst element of the whole scandal. “I do spend it on wine and different things,” he remarked. In reality the allowance for peers is £300 a day, though it does not apply to Sewel. He is paid £120,000 a year, made up of his salary for his part-time work chairing committees in the Lords (£84,525) and his allowance of £36,000 for maintaining a home in London. He complains that he is struggling, and when one of the women asks if his £200 allowance pays for his lunch, he replies: “It’s not lunch luvvie darling, it’s paying for this”. Wow. Is there any real question that he should remain in the House? That he should not be expelled?