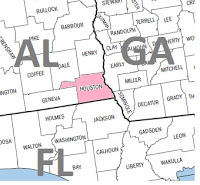 It’s not clear how many Alabama counties continue to hold out. Two weeks ago the number was thirteen. (Tipped by JMG reader Grant)