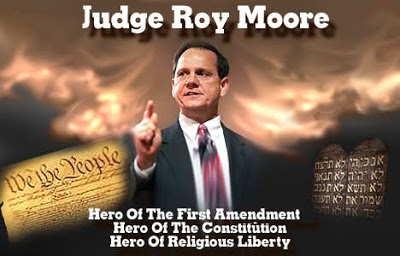 In its filing today, SPLC says Moore has committed new ethics violations by improperly commenting on pending or impending cases in numerous speeches and interviews; by suggesting that Supreme Court precedent need not be followed; and by announcing that he would recuse himself from cases rather than apply precedents with which he disagreed. The SPLC also contends Moore’s continued association with the Foundation for Moral Law also violates the Alabama Canon of Judicial Ethics. Moore’s wife, Kayla, services as the president of the legal services organization; Moore is listed as president emeritus.

“Justice Moore has been removed from office for unethical actions once before, but it’s clear that he hasn’t learned his lesson,” SPLC President Richard Cohen said in a statement. “It’s obviously unethical for him to urge defiance of a United States Supreme Court ruling. He needs to understand that he is a judge, not a preacher.” The SPLC complaint states that in a July 7 interview with political activist Randall Terry, Moore indicated that he was in “active” conflict with the federal judiciary over its “horrendous opinion” in the same-sex marriage case and was fighting the same-sex ruling with briefs and speeches.

The SPLC’s original complaint, filed in January, contends that Moore is “encouraging lawlessness by attempting to assemble state officials and judges to oppose the federal court system.”

Previous Enter Candidate #17
Next TRAILER: The 33