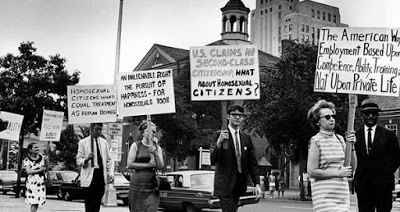 50 Years Ago In Philadelphia

Gay rights activists gathered in front of Independence Hall in Philadelphia on the Fourth of July to mark the progress of their movement and pay tribute to those who launched it a half-century ago — but also made it clear that the fight for equality was far from over. “In too many communities, you can still get married on Sunday and then fired on Monday . Marriage equality was a critical milestone but not the final destination,” said activist Aisha Moodie-Mills, referring to the recent U.S. Supreme Court decision legalizing same-sex marriages nationwide. “If history has taught us anything, it’s that no community’s rights are one and done with a simple piece of legislation. . Equality is not set in stone,” Moodie-Mills said. The event was part of a weekend-long celebration of some of the earliest gay rights marches, including a gathering of about 40 protesters calling for equality at the same location on July 5, 1965.

More from the Wall Street Journal:

Most people associate the beginning of the LGBT rights movement with the Stonewall Riots in 1969, when a police raid at the Stonewall Inn caused many patrons to fight back. But four years earlier, on July 4, 1965, a group of 40 activists, led by organizers Frank Kameny and Barbara Gittings, held what was at the time the largest demonstration in support of gay rights in the world. This began what became known as the “Annual Reminders” demonstrations, strategically held each year at Independence Hall where the Liberty Bell then resided, reminding people of the Declaration of Independence’s proclamation of the right to “life, liberty and the pursuit of happiness.” After the Stonewall riots, Kameny and Gittings suspended the annual reminders to focus on organizing a demonstration to commemorate Stonewall, launching in 1970 what has since become known as NYC’s first-ever Pride Parade.