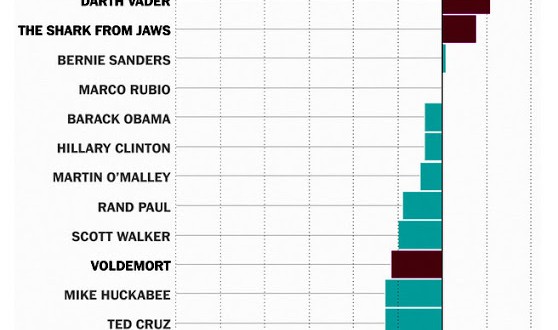 Of all the declared and potential 2016 candidates in the Washington Post’s net favorability poll, only Sen. Bernie Sanders is (barely) in positive territory.

The real-world surveys show that the overwhelming majority of presidential candidates are running negative favorability scores. Quinnipiac has Bernie Sanders at +1 overall, although that’s partly because 62 percent of Americans say they haven’t heard enough about him to form an opinion. The closest Republican is Marco Rubio — the same number of Americans say they view him positively as those who view him negatively, meaning his score nets out to exactly zero. Clinton and Obama are tied at -4. And it’s all downhill from there, all the way down to Donald Trump. Only 15 percent of Americans view him favorably, compared to 71 percent who have a negative opinion. That gives him a net favorability of -56, more than twice as bad as the next-lowest candidate, Chris Christie, with his -26 score.