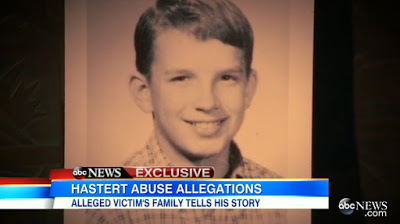 In Steve Reinboldt’s 1970 high school yearbook, wrestling coach Dennis Hastert wrote that Steve was his “great, right hand man” as the student equipment manager of the Yorkville, Illinois wrestling team. But Steve was also a victim of sexual abuse at the hands of Hastert, Steve’s sister said today in an interview with ABC News. It is the first time an alleged Hastert victim has been identified by name since his indictment for lying to the FBI and violating federal banking laws to cover-up past misconduct. Hastert, due in court next week, has not responded to the allegations. In an emotional interview, Steve Reinboldt’s sister Jolene said she first learned of her late brother’s purported years-long sexual abuse at the hands of the future Speaker of the House back in 1979 when her older brother revealed to her that he was gay and had been out of high school for eight years. “I asked him, when was your first same sex experience. He looked at me and said, ‘It was with Dennis Hastert,’” Jolene said. “I was stunned.”

Reinboldt died of AIDS in 1995. Still unnamed is the person alleged to have been blackmailing Hastert.