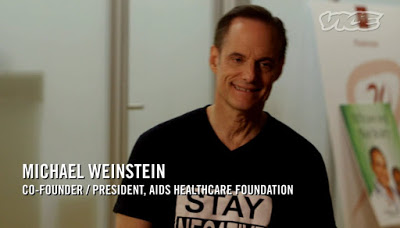 VICE has launched a three-part series titled The Truvada Revolution.

A drug called Truvada is the first the FDA-approved means of preventing HIV infection. If an HIV-negative person takes the pill every day, they’re nearly 99 percent protected from contracting the virus. Controversy continues to surround the broad uptake of Truvada, but the landscape of safer sex and HIV-prevention changes fundamentally from this point forward—particularly within the gay male community, the population hardest hit by HIV in America. In this episode of VICE Reports, VICE explores the future of the Truvada and its revolutionary impact on ending HIV/AIDS.

Near the end of the clip below, AIDS Healthcare Foundation head and anti-PrEP activist Michael Weinstein talks about his campaign against the use of Truvada as a daily HIV preventive. See Part 2 and Part 3. The series was produced and directed by my pal (and JMG reader) Eric Leven.

Previous TEXAS: Hate Group Has The 2015 Sadz
Next TRAILER: I Am Cait