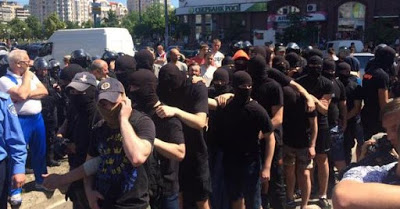 Several dozen unknown assailants attacked a gay pride rally in Kiev on Saturday, throwing flares and wounding two policemen, a Reuters witness reported. Organizers for ‘KyivPride2015’ said the march along the Dnipro river would go ahead despite warnings from city mayor Vitaly Klitschko, who advised the event be canceled because of a threat of violence from far-right groups. Despite the presence of several hundred police in riot gear, the march of around 150 LGBT supporters carrying rainbow banners and placards came under attack and 25-30 “hooligans” were arrested, parliament member Serhiy Leshchenko said on Twitter. Leshchenko said police had prevented any direct clashes between participants in the march and the attackers.

Ukrainian President Petro Poroshenko voiced support for LGBT rights, saying he believes an equality march planned for Saturday in Kiev should take place as planned. “I will not participate in it, but I don’t see any reason to impede this march because it’s a constitutional right of every citizen of Ukraine,” he said at a press conference on Friday. No president of Ukraine — a post-Soviet state of more than 40 million mostly-conservative Orthodox Christians — has ever voiced support of the country’s LGBT community, activists told Mashable. Poroshenko has been mostly silent on the topic of LGBT rights until now. Taras Karasiichuk, an organizer of the planned equality march, said he was shocked by the president’s remarks. “I’m really surprised,” he said. “It’s huge. And it’s important.” Poroshenko’s remarks came in response to a question by a journalist who asked whether the president could guarantee the security of those participating in Saturday’s march after threats from far-right nationalist groups this week.

It appears that the attacks were coordinated by members of Ukraine’s neo-Nazi Right Sector Party.  The BBC reports that five riot police were injured, one seriously.

Nine police officers were injured during a LGBT “March for Equality” in Kiev on Saturday, after right-wing counter protesters attacked the event, according to a press release from the Ukrainian Ministry of Internal Affairs. Police deployed more than 2,000 officers to protect the event, which was canceled last year because the police said they would not protect participants. One of the injured officers took a “shrapnel wound” to the neck, according to officials. This video [BELOW] shows police detaining and unmasking attackers. The Ministry of Internal Affairs said 25 people were arrested for “illegal actions” during the march.