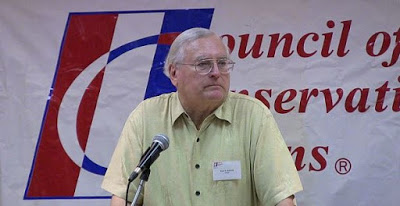 The leader of a rightwing group that Dylann Roof allegedly credits with helping to radicalise him against black people before the Charleston church massacre has donated tens of thousands of dollars to Republicans such as presidential candidates Ted Cruz, Rand Paul and Rick Santorum. Earl Holt has given $65,000 to Republican campaign funds in recent years while inflammatory remarks – including that black people were “the laziest, stupidest and most criminally-inclined race in the history of the world” – were posted online in his name.

After being approached by the Guardian on Sunday, Cruz’s presidential campaign said it would be returning all money the senator had received from Holt. Holt, 62, is the president of the Council of Conservative Citizens (CofCC), a Missouri-based activist organisation cited by the author of a manifesto-style text that was posted on a website registered in Roof’s name along with photographs of the gunman. The FBI said on Saturday it was investigating the website. The manifesto’s author, who has been widely reported but not verified as Roof, recounted learning about “brutal black on white murders” from the CofCC website.

The CCC has issued a statement which condemns Dylann Roof but also defends his “legitimate grievances.”

The C of CC unequivocally condemns Roof’s murderous actions. However, the council stands unshakably behind the facts on its website, and points out the dangers of denying the extent of black-on-white crime. Every year, there are about 500,000 violent , interracial crimes. Of these, about 85 percent are committed by blacks against whites. Every year, there are some 20,000 rapes of white women by blacks, but rapes by white men of black women are so unusual, they scarcely appear in crime statistics.

If these figures were reversed—if there were wide-spread white-on-black rape and violence—it would be constant national news. Instead, the true nature of interracial violence is ignored. This is dangerous. Our society’s silence about these crimes—despite enormous amounts of attention to “racially tinged” acts by whites—only increase the anger of people like Dylann Roof. This double standard *only makes acts of murderous frustration more likely*.

In his manifesto, Roof outlines other grievances felt by many whites. Again, we utterly condemn Roof’s despicable killings, but they do not detract in the slightest from the legitimacy of some of the positions he has expressed. *Ignoring legitimate grievances is dangerous*.

Hit the Guardian link for many of the appalling statements attributed to Earl Holt, some of which were made in the comments sections of Glenn Beck’s site The Blaze.