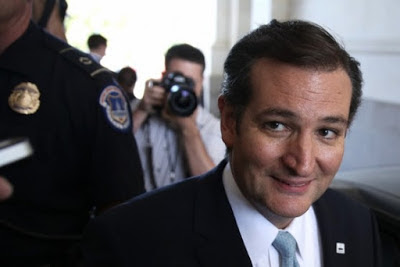 Ted Cruz has decided that the Supreme Court’s marriage ruling only applies to the four states involved in the case. Via Politico:

“Those who are not parties to the suit are not bound by it,” the Texas Republican told NPR News’ Steve Inskeep in an interview published on Monday. Since only suits against the states of Ohio, Tennessee, Michigan and Kentucky were specifically considered in the Supreme Court’s Obergefell v. Hodges decision, which was handed down last Friday, Cruz — a former Supreme Court clerk — believes that other states with gay marriage bans need not comply, absent a judicial order. “On a great many issues, others have largely acquiesced, even if they were not parties to the case,” the 2016 presidential contender added, “but there’s no legal obligation to acquiesce to anything other than a court judgement.” While Cruz’s statement may be technically true, federal district and circuit courts are obligated to follow the Supreme Court’s precedent and overrule all other states’ same-sex marriage bans as unconstitutional.

Cruz also says that any Republican who abides by the ruling is secretly a supporter of same-sex marriage.