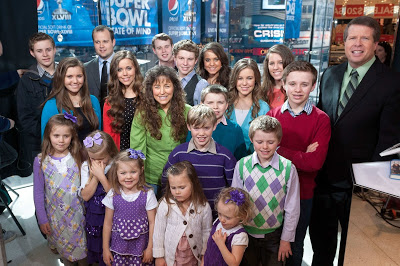 In Touch did promise us new revelations:

The Duggar family is under investigation again by the Arkansas Department of Human Services and police were called when the family refused to cooperate, In Touch magazine is reporting exclusively in its new issue that hits newsstands today. A representative from the Washington County DHS called 911 on May 27 at around 11 a.m. asking for police assistance when DHS was not allowed to see the minor they were concerned about. In Touch, which broke the story of Josh Duggar’s sexual molestation scandal, has the full transcript of the emergency call in the new issue. The new investigation comes as the family tries to save its TLC reality show, 19 Kids and Counting, which the network pulled off the air, while determining its fate. Jim Bob, Michelle and two of their daughters sat for interviews with Fox News, attempting to minimize the damage, but much of what they said was widely condemned as misinformation and not full disclosure.

In Touch notes that the latest investigation could have been triggered by a complaint to a state hotline, including an anonymous one. (Tipped by JMG reader Sharon)

Previous Viral Video Of The Day
Next MAP: Largest Companies By Home State