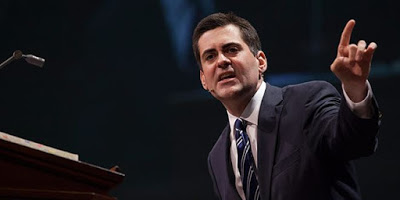 “The Confederate Battle Flag may mean many things, but with those things it represents a defiance against abolition and against civil rights. The symbol was used to enslave the little brothers and sisters of Jesus, to bomb little girls in church buildings, to terrorize preachers of the gospel and their families with burning crosses on front lawns by night. That sort of symbolism is out of step with the justice of Jesus Christ. The cross and the Confederate flag cannot co-exist without one setting the other on fire. White Christians, let’s listen to our African-American brothers and sisters. Let’s care not just about our own history, but also about our shared history with them. In Christ, we were slaves in Egypt—and as part of the Body of Christ we were all slaves too in Mississippi. Let’s watch our hearts, pray for wisdom, work for justice, love our neighbors. Let’s take down that flag.” – Russell Moore, president Ethics & Religious Liberty Commission of the Southern Baptists Convention.

Todd Starnes is ever so pissed.

RELATED:  The Southern Baptist Convention formed in 1845 expressly to support slavery after Baptists in northern states joined the abolitionist movement. But it wasn’t until 1995 that the SBC marked its 150th anniversary by issuing a formal apology. An excerpt:

WHEREAS, Our relationship to African-Americans has been hindered from the beginning by the role that slavery played in the formation of the Southern Baptist Convention; and

WHEREAS, Many of our Southern Baptist forbears defended the right to own slaves, and either participated in, supported, or acquiesced in the particularly inhumane nature of American slavery; and

WHEREAS, In later years Southern Baptists failed, in many cases, to support, and in some cases opposed, legitimate initiatives to secure the civil rights of African-Americans; and

Therefore, be it RESOLVED, That we, the messengers to the Sesquicentennial meeting of the Southern Baptist Convention, assembled in Atlanta, Georgia, June 20-22, 1995, unwaveringly denounce racism, in all its forms, as deplorable sin; and

Be it further RESOLVED, That we apologize to all African-Americans for condoning and/or perpetuating individual and systemic racism in our lifetime; and we genuinely repent of racism of which we have been guilty, whether consciously (Psalm 19:13) or unconsciously (Leviticus 4:27); and

Be it further RESOLVED, That we ask forgiveness from our African-American brothers and sisters, acknowledging that our own healing is at stake.

ALSO RELATED: Several days ago the Southern Baptist Convention issued a formal declaration of civil disobedience against the Supreme Court should it rule in favor of same-sex marriage.