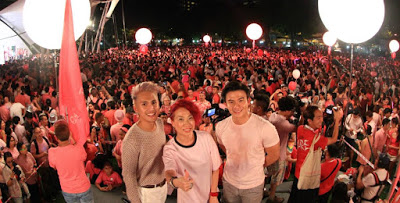 Singapore’s Pink Dot gay rights rally drew a record number of participants on Saturday, even as the country remains deeply divided over homosexuality. In early evening, a mostly young, pink-donned crowd was filling up the small Hong Lim Park, decked out in hot pink balloons and signs, next to Singapore’s central financial district. The event, in its 7th year, included speeches and a concert, while 28,000 participants formed a gigantic human pink dot after night fall, the organiser said. The event’s spokesman, Paerin Choa, somberly recounted the challenges the gay rights movement had encountered over the past year, including a court decision to uphold a law criminalising sexual acts between men. Singapore’s Prime Minister Lee Hsien Loong said last week that the country was not ready for same-sex marriage, while a “Wear White” movement started by religious groups to counter Pink Dot has entered its second year. “I hope that they will legalise gay marriage,” said a 20-year-old Danish man, holding up a pink sign with a friend to offer free hugs near a subway exit on the edge of the park.

The promotional clip for Pink Dot is always wonderful.

Previous On Sale By Sen. Marco Rubio
Next MAP: All Of The Former And Current Gay Bars In New York City History