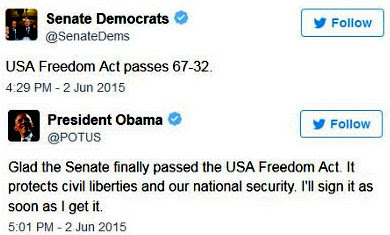 The Senate has approved the USA Freedom Act, which will alter the way U.S. agencies conduct surveillance and gather data. A final vote on the bill came late Tuesday afternoon, after amendments to the bill failed. President Obama can now sign the bill into law as soon as it reaches him, after an expedited enrollment process. Sen. Rand Paul, R-Ky., voted against the measure today, as he did last fall. Also voting against the bill Tuesday was independent Sen. Bernie Sanders, who is seeking the Democratic presidential nomination. The lead sponsor of the bill in the House, Rep. Jim Sensenbrenner, R-Wis., promises it will “rein in the dragnet collection of data” by the NSA and others, and “increase transparency of the Foreign Intelligence Surveillance Court.” Calling today’s passage “a milestone,” ACLU Deputy Legal Director Jameel Jaffer says, “This is the most important surveillance reform bill since 1978, and its passage is an indication that Americans are no longer willing to give the intelligence agencies a blank check.”