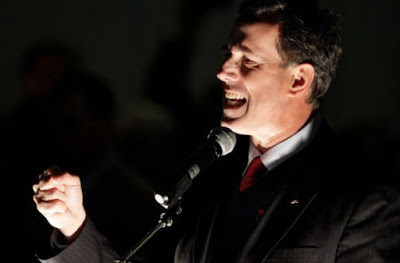 Rick Santorum: Same-Sex Marriage Is A Violation Of The First Amendment And As President I Won’t Enforce It

Rick Santorum called into Glenn Beck’s show today to declare that as president he will not enforce a SCOTUS ruling on same-sex marriage. Because gay marriage is somehow against the First Amendment.

“This is tantamount to government establishing religion,” Santorum said. “When the United States government comes in and says this is what you are going to believe, this is how you’re going to practice your faith, this is a new religion. This violates, in my opinion, the Establishment Clause in the Constitution that says that Congress shall make no law with respect to an establishment of religion. If the government goes around and tells churches what they have to believe in and what their doctrine is, that is something that is a violation of the First Amendment.” Santorum said that he holds out hope that the Supreme Court will rule against marriage equality advocates “because there is no way that the left will stop at mere tolerance, they will demand conformity, they will demand it from the church, they will demand it from every institution, they will demand it from businesses and there will be no tolerance to a different point of view on this issue.”