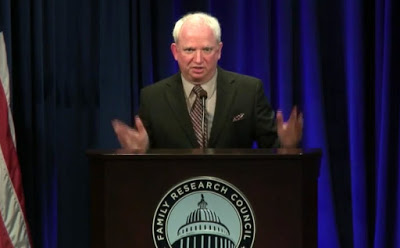 “Contrary to the way it was reported here in the United States, it provided life imprisonment for aggravated homosexuality, that is homosexual acts committed by somebody infected with HIV/AIDS, who knew that by conducting that act they knew they were very likely to give that deadly disease – death sentence – to their sex partners. And homosexual acts with minors. And then prison for groups who counsel people into homosexuality. The Ugandan Supreme Court invalidated the law, but only on technical grounds that there had not been a quorum. I suspect that it’s going to come back and I hope that it does come back in short order.” – NOM Chairman John Eastman, speaking in an FRC video which denounces the Obama administration’s “pro-homosexuality agenda” in foreign relations. Eastman fails to note that under the stricken-for-now Ugandan bill, “aggravated homosexuality” is also defined as having been arrested on those charges more than once.

Here is the clip description:

The Obama administration has engaged in an aggressive effort to force recipients of American foreign aid to accept the President’s pro-homosexuality agenda. This has gone even to the point of demanding that African nations change their laws against same-sex intimacy and those barring same-sex marriage or risk losing U.S. assistance and even American military support in fighting terrorist organizations. As with so many other areas of Mr. Obama’s priorities, this initiative pushes the statutory authority of the President past the breaking point. Join FRC and Dr. John Eastman as he examines the ways in which our foreign policy has promoted a radical agenda on marriage and sexuality and what can be done to change it.

Eastman’s comments on Uganda begin at 38:00.