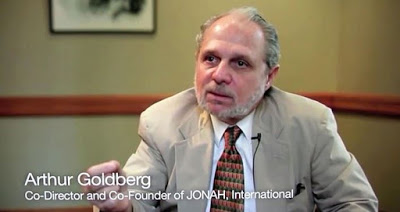 The SPLC’s fraud lawsuit against the New Jersey-based “ex-gay” group JONAH has been underway since last week. Via New Jersey Jewish News:

On the trial’s second day, the plaintiffs’ lawyer Lina Bensman pointed out that Goldberg was a disbarred attorney who in 1989 was incarcerated for six months on federal tax fraud and conspiracy charges while heading a New York underwriting firm. She asked why he had occasionally identified himself as a “doctor,” although he was not a physician and had no PhD. “I am a JD, a juris doctor,” he explained. Goldberg also acknowledged that he used the title “rabbi” on occasion, although he was not ordained. “I was not a rabbi,” he said. “I have no formal religious training other than going to a yeshiva in grade school.”

Goldberg also testified, “I have never been a licensed counselor. I give advice.” But after being shown a signed document projected on a video screen, Goldberg acknowledged he had applied to the American Psychotherapy Association to become a certified relationship specialist and a certified professional counselor. “But these certifications were revoked?” asked Bensman. “Yes, ma’am” he replied. “And the certifications read, ‘I certify I have not been convicted of a felony’?” “That is correct,” he said. Under questioning by his own attorney, Goldberg said he believed that his felony fraud and conspiracy convictions were essentially nullified more than 20 years after his guilty pleas in 1989, allowing him to check “no” on the application.

More about Goldberg from the Village Voice:

In 1987, prosecutors accused Goldberg of orchestrating a massive municipal-bond fraud scheme, essentially selling more than $2 billion in bogus bonds between 1985 and 1986 to finance public works projects in smaller, rural, and often poor communities in the Midwest. Most of the projects were never completed, and Goldberg was eventually charged with 52 counts of bribery, fraud, and conspiracy, among other things, by a federal grand jury. He later pleaded guilty to three counts of mail fraud in California. The scheme cost the U.S. Treasury millions in lost taxes, and Matthews & Wright Inc. lost its license to sell securities and later dissolved completely.

Goldberg, who testified before a jury on June 8, declined on several occasions to speak on the record for this article. One day at the JONAH offices in Jersey City he confronted a Voice reporter, asking her to leave the building and calling her presence “absolutely inappropriate and out of line.” He would later agree to answer a few questions, through his lawyer, via email. “Over 100 people lost their jobs and a good career because of what Arthur did, and that’s just pure greed,” Goldberg’s former colleague says. “And he never apologized to anyone. I hoped he’d get life [in prison]. If I’d run into him on the street, I’d grab him by the throat.”

Hit the first link for more about the trial and the second for an excellent and lengthy history of the “ex-gay” movement. Equality Case Files is attending the trial and is posting transcripts of the proceedings. JONAH is being defended by a legal group headed by Maggie Gallagher.

All his life Arthur Goldberg was a liberal New York Jew, almost stereotypical. He fought for civil rights for African Americans, he fought for better housing for New York’s poor, the whole schmear of respectable liberal causes. And then his son came out as gay and Arthur wanted to help him. When they founded JONAH, neither Goldberg or Berk knew that choice in sexual orientation or choice in psychological counseling would become a third rail in progressive politics. Now they are the target of one of the richest and most powerful left-wing groups in America. The Southern Poverty Law Center — with $340 in the bank and revenues of $50 million a year — is a group with almost limitless money to spend on litigation and it, along with activist Wayne Besen of a group called Truth Wins Out, have spent millions to put JONAH out of business and to punish Goldberg and Berk for trying to help those with unwanted same-sex attraction.