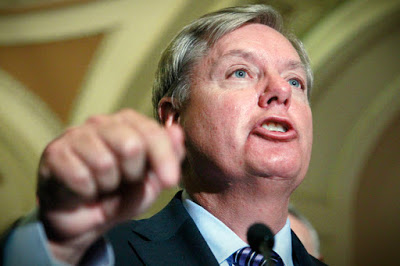 Sen. Lindsey Graham: When I’m Elected, My Female Friends (In Canada) Will Act As Our “Rotating First Ladies”

Unmarried Republican Sen. Lindsey Graham says that if he becomes president, he will have a “rotating first lady.” “Well, I’ve got a sister. She could play that role if necessary,” the 59-year-old South Carolinian presidential hopeful told Daily Mail Online in an interview published Tuesday. “I’ve got a lot of friends. We’ll have a rotating first lady,” he added. His sister, Darline Graham Nordone, resides in South Carolina with her husband and two daughters from previous marriages, suggesting that she would not be able to be in Washington all the time.

Historically, in the absence of a FLOTUS, daughters, sisters and other female relatives have filled the role. Graham would be the first bachelor in the White House since Woodrow Wilson, whose first wife Ellen died in 1914, just a year into his presidency. (Wilson later married Edith Bolling Galt in 1915, who herself assumed an important role in the executive branch when her husband had a severe stroke in 1919.) There have only been two presidents who were unmarried when taking the oath of office: James Buchanan and Grover Cleveland. The 49-year-old Cleveland later married 21-year-old Frances Folsom in 1886 while in office; Buchanan remained a bachelor.

Graham went on to say that his White House will be more friendly and welcoming than that of the “distant” Obamas.