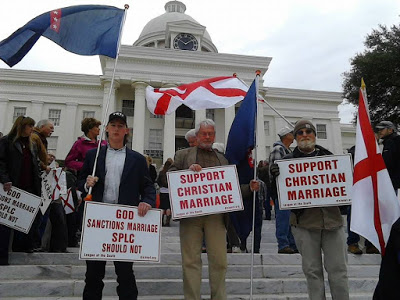 Back in February supporters of the League Of The South demonstrated at an anti-gay marriage rally on the steps of the Alabama capitol. Yesterday Michael Hill, president of the League, defended the author of the website for the Council Of Conservative Citizens.  Warren Throckmorton has the statement:

The League of the South supports our friend and compatriot, Kyle Rogers, of the Council of Conservative Citizens (CofCC), who is being lambasted by the left-wing media for turning Dylann Roof, the young man arrested for the Charleston church shooting, into a “white nationalist.” From our point of view, all Mr. Rogers has done is diligently catalog the facts about the epidemic of black-on-white violent crime in America. We see this as a service that the mainstream US media refuses to provide to the public, thereby endangering the lives of many innocent people. The fact that young Mr. Roof chose to act on this information is no fault of Mr. Rogers or anyone else who tells the hard truths about race that the leftist media regularly sweeps under the rug. To attempt to blame Mr. Rogers, the CofCC, the Confederate battle flag, Southern culture, or the Easter Bunny for causing this murder is the sort of repulsive ideological persecution one used to find commonplace in the old USSR. It is, in a word, shameful.

PREVIOUSLY ON JMG: Michael Hill participates in JMG thread. The League Of The South celebrates 150th anniversary of Abraham Lincoln’s assassination. Creationist Ken Ham headlines convention held by former League head Michael Peroutka. Right Wing Watch reports that Michael Peroutka bankrolled the return of Roy Moore to the Alabama Supreme Court. The SPLC reports that the membership rolls of the League and the Council of Conservative Citizens “overlap greatly.” Tony Perkins speaks at 2001 meeting of the Council Of Conservative Citizens.

Previous Jeb Bush: Look What I Did In Florida
Next TRAILER: New Order’s Music Complete