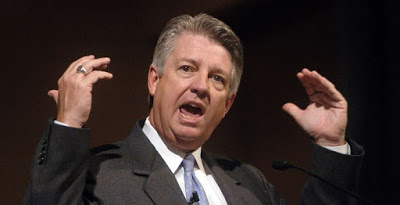 Prepare for civil disobedience. That’s the message one prominent pastor is sending to some 16 million members of the Southern Baptist Convention. Jack Graham, pastor of Prestonwood Baptist Church in Texas, said American Christians should be prepared for massive fallout if the Supreme Court legalizes same-sex unions. “We want to stay in the system,” Graham told me in a telephone interview. “We want to work in the system. We want to support our government. We want to obey its laws.” But. “But there’s a coming a day, I believe, that many Christians personally and churches corporately will need to practice civil disobedience on this issue.”

So what would it look like if 16 million Southern Baptists engaged in civil disobedience? “I hope we never live to find out what that looks like,” Graham told me. “There are many Christians today who are preparing if necessary to go to jail.” I’ve known Pastor Graham for years and I’ve never known him to use hyperbole. His words and his predictions are sobering. And he hopes the Supreme Court and Washington, D.C. hear what Southern Baptists are saying. “We want them to know our voices will be heard,” he declared. Graham said they are calling on Southern Baptist business owners and public sector workers to stand together as well – knowing full well they could lose their jobs and careers. “We are concerned about Southern Baptist Christians in the marketplace – in the media and corporate world,” he said.

Jack Graham was president of the Southern Baptist Convention from 2003-2004. His Plano megachurch claims 38,000 members. He is unrelated to the more infamous Graham family.

Previous Cliff Kincaid: Christians Must Fight To Their Deaths Against Same-Sex Marriage
Next One Million Moms Vs Chobani Yogurt