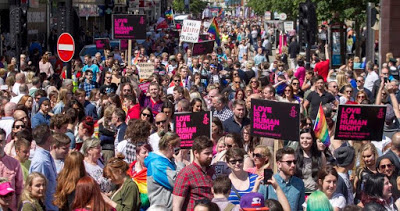 An estimated crowd of 20,000 marched on Belfast City Hall today to demand same-sex marriage. Via the Guardian:

Northern Ireland has been left behind in the struggle for gay equality, the Irish trade union movement said on Saturday, as thousands marched in Belfast to call for the recognition of same-sex marriage. The Irish Congress of Trade Unions (ICTU) pointed out that the province once led the way in terms of rights for same-sex partners. “In 2005, history was made when Northern Ireland became the first place in the UK to hold a civil partnership. Ten years later, with every other part of these islands recognising marriage equality, citizens in Northern Ireland have effectively been left behind,” the ICTU said. The demonstration through central Belfast to city hall was part of a campaign by local gay rights organisations and human rights groups for the province’s law to be changed. Among those marching was Snow Patrol’s lead singer, Gary Lightbody. Amnesty International said the region was now the “last bastion of discrimination against gay people in these islands”.

More from the Independent:

The crowd, organised by Amnesty International, the Irish Congress of Trade Unions and the Rainbow Project, said they want parity with the rest of the UK and Ireland in permitting civil marriage for gay couples. Addressing the rally, Patrick Corrigan, Amnesty International’s Northern Ireland programme director, said: “Isn’t this the most beautiful march and rally Belfast has ever seen? A march about love. “We are all here today because of a simple idea: all people are equal. The state should treat all people equally.” The Northern Ireland Assembly has rejected a proposal calling for the introduction of gay marriage after debating the issue for a fourth time. Sinn Fein said equality rights for same-sex couples must be shared by citizens in the north and it will continue to campaign for the reform. Other high profile supporters of the campaign include singer Brian Kennedy and Olympic boxer Paddy Barnes. Singer Bronagh Gallagher, supported by Quire, Belfast’s LGBT choir, performed at the Belfast City Hall rally, which followed the march from the Ulster University on York Street.