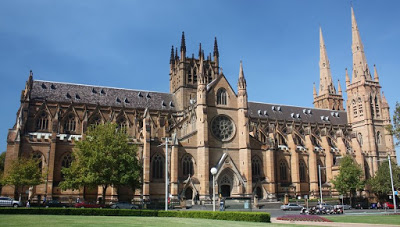 AUSTRALIA: Catholic Church Pressures Businesses To Back Off Marriage Support

The Archdiocese Of Sydney is ever so pissed at the 150+  Australian corporations that have placed a joint newspaper campaign in support of same-sex marriage.

The Catholic Church in Sydney is sending letters to companies that publicly support same-sex marriage, expressing its “grave concern” about their stance. The ABC has seen a copy of one letter addressed to the chairman of partners at Maurice Blackburn law firm, Steve Walsh, from the Archdiocese’s business manager Michael Digges. “It is… with grave concern that I write to you about the Marriage Equality for Australians campaign,” it reads. “You are publically supporting a strategic, political and well-funded campaign designed to pressure the Federal Government into changing the Marriage Act. For corporations to speak on such issues… is indeed overstepping their purpose and it is to be strongly resisted.” Maurice Blackburn principal Liberty Sanger said she was not sure what the intention of the letter was, but either way the law firm would not be intimidated.

The letters contain veiled threats to boycott LGBT-supportive businesses, warning them that the church is a “significant user of goods and services.”