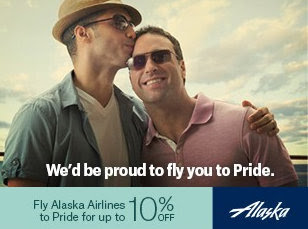 At Alaska, we have been longtime supporters of the LGBT community and remain committed to a more equitable society. We were elated when the State of Washington expressed the same commitment by legalizing marriage for everyone, regardless of sexual orientation or gender identity. To show our continued support we are encouraging the LGBT community to travel, not only to Seattle, but to Pride events and gay friendly destinations all over the country. With that aim, we have put together this section of our site to highlight destinations that support marriage equality, Pride celebrations, and other things of interest to the LGBT community. Make sure to check out our flight deals for low fares to your favorite cities and take a look at our group rates when planning special events, from birthdays to weddings.

Making the rounds in Teabagistan:

The establishment campaign to promote disease-spreading and culture-corroding perversity has reached the point that Alaska Airlines now implies discounts for homosexuals. How applying cultural Marxism with special “Pride Discounts” for groups favored by liberals will make for a more “equitable society” is left for college professors to explain. It’s their airline; to the extent the government leaves them alone, they are free to push whatever agenda they want, just as we are free to take any other transportation we can find including dog sleds rather than fly Alaska Airlines. But imagine how fast Big Government would come down on them if their advertisements led people to believe they could get a discount for being sexually healthy.

Airlines routinely offer promotions for special events and nothing at their site indicates that the discount is limited to gay people. But…but… outrage!