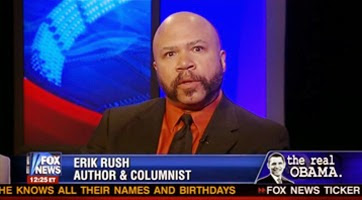 “I’ll have to admit that First Sasquatch Michelle Obama outdid her husband concerning racialist gaffes in one fell swoop over the weekend, when she bloviated at length before a lectern at Tuskegee University. Her so-called commencement address was largely a stream of self-pitying, self-righteous, bitter, paranoid racialist propaganda. Whining ad nauseum about such horrors as having been mistrusted, talked down to, underestimated and perennially under some suspicion, all because of the color of her skin (at least this was her perception), Michelle O underscored it all with audience identification aplenty, and intimations that ‘it ain’t over yet.'” – Erik Rush, writing for the Christian site World Net Daily.