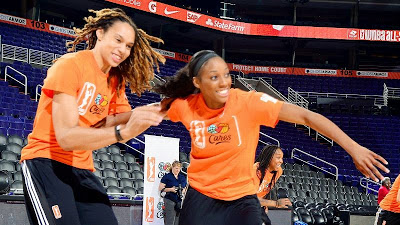 WNBA stars Brittney Griner and Glory Johnson were suspended seven games each Friday for their domestic violence arrest last month — the league’s longest ban in its 19-year history. WNBA President Laurel Richie said the league “takes all acts of violence extremely seriously” in handing down a suspension that represents more than one-fifth of the 34-game regular season. Richie called the players’ actions “unacceptable.” “Brittney and Glory’s conduct is detrimental to the best interests of the WNBA and violates applicable law,” Richie said in a statement. “We also understand that people make mistakes, and that education and training are as important as imposing discipline.” The punishment comes at a time when sports leagues around the country are reviewing domestic violence policies following high-profile cases involving the NFL. Richie said she consulted with NBA Commissioner Adam Silver and a variety of experts.

The couple was arrested in late April following a fight in the home they recently bought. They married in Arizona last week.