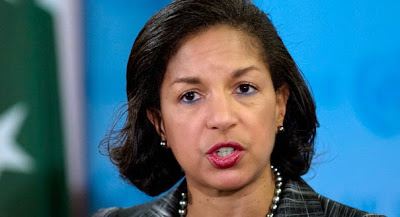 Several days ago Gambian President Yahya Jammeh vowed to “slit the throats” of gay men, adding, “If you are a man and want to marry another man in this country and we catch you, no one will ever set eyes on you again, and no white person can do anything about it.” Yesterday US National Security Adviser Susan Rice denounced Jammeh.

“We condemn his comments, and note these threats come amid an alarming deterioration of the broader human rights situation in The Gambia,” Rice said in a statement. “We are deeply concerned about credible reports of torture, suspicious disappearances – including of two American citizens – and arbitrary detention at the government’s hands.” Rice made the remarks in a statement one day before the International Day Against Homophobia & Transphobia, saying the remarks from Gambia President Yahya Jammeh underscore the need for continued efforts “to seek a world in which no one lives in fear of violence or persecution because of who they are or whom they love.” Jemmeh, who’s been in power since 1994 and survived a coup attempt on December 30, issued a warning to gay men in the Wolof language during a recent rally in which he also threatened the political opposition, according to a translation of his remarks obtained by the international news agency Vice News.

In October 2014 Jammeh signed a bill which makes homosexual acts punishable by life in prison.