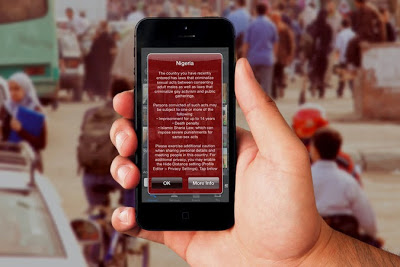 To help keep users safer, Scruff is adding a new traveler alert feature this week. Now, when a user arrives in one of the nearly 100 countries where homosexual acts are criminalized, an alert will pop up when they open Scruff. Headed to Sudan? You might want to be aware that sexual acts between consenting adult males are illegal there, and can lead to corporal punishment or even the death penalty.

The app’s users do not always avoid hostile regions. In fact, more than 100,000 users with Scruff accounts that are registered in the United States, Britain or Australia were traveling in places where homosexuality is illegal over a recent 30-day period, according to a study Mr. Silverberg made available. (He said Scruff users overall number around eight million.)

Scruff has used a similar alert before, in the case of the report last year from the user in Saudi Arabia. At the time, Mr. Silverberg said, Scruff sent out a one-time in-app alert, notifying members in that area about what they had heard, and cautioning them to be careful. Grindr sent a similar alert to users last fall, based on similar stories coming out of Egypt.

Scruff has also limited the GPS function with “location obfuscation” – other users will be able to see that users that are relatively near to them, but without being able to identify the exact location. Critics of GPS-based hook-up apps have previously warned that the users are vulnerable to location triangulation by police or criminals. They claim that the triangulation can be so precise that a user’s presence in specific rooms of a building can be identified.