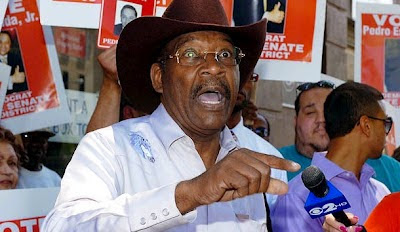 Ruben Diaz: My Wife Was Denied City Job Over Position On Gay Marriage

New York state Sen. Ruben Diaz, the leading anti-gay nutcase in the legislature, is screaming that his wife was denied a job with New York City because she opposes same-sex marriage. Via the Observer:

A Bronx state senator is charging that Comptroller Scott Stringer denied his wife a job because she opposes same-sex marriage–even though Mr. Stringer’s office claims she was never offered a position. State Senator Rubén Díaz Sr., a conservative Democrat, said in an email today that his wife, Leslie Díaz, was recently offered an unspecified position in Mr. Stringer’s office. When Mr. Stringer found out that she, like her husband, is not a supporter of same-sex marriage, the offer was rescinded, according to Mr. Díaz. “Leslie’s co-workers gave her a very nice going away party. We were all very happy that Leslie was going to be working for the New York City Comptroller’s Office,” Mr. Díaz wrote in one of his periodic emailed missives known as “What You Should Know.” “Then, two days before her expected start date for her new position, she got a phone call informing her that Scott Stringer had just received a copy of a video that shows Leslie standing and participating with me–her husband–at a peaceful demonstration that we held in opposition to same-sex marriage,” he continued. Mr. Díaz said his wife was informed that because of the video, Mr. Stringer, a fellow Democrat and backer of same-sex marriage, would not offer his wife the job.

A spokesman for Stringer says that Diaz is spewing “nonsense” and that his wife was never even in consideration for the position. Diaz, you surely recall, bused in the majority of the attendees at the last two hate marches organized by NOM. (Via Aksarbent)