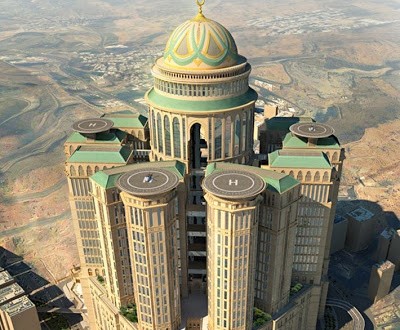 Mecca To Get World’s Biggest Hotel

Four helipads will cluster around one of the largest domes in the world, like sideplates awaiting the unveiling of a momentous main course, which will be jacked up 45 storeys into the sky above the deserts of Mecca. It is the crowning feature of the holy city’s crowning glory, the superlative summit of what will be the world’s largest hotel when it opens in 2017. With 10,000 bedrooms and 70 restaurants, plus five floors for the sole use of the Saudi royal family, the £2.3bn Abraj Kudai is an entire city of five-star luxury, catering to the increasingly high expectations of well-heeled pilgrims from the Gulf. Modelled on a “traditional desert fortress”, seemingly filtered through the eyes of a Disneyland imagineer with classical pretensions, the steroidal scheme comprises 12 towers teetering on top of a 10-storey podium, which houses a bus station, shopping mall, food courts, conference centre and a lavishly appointed ballroom.

According to Euromonitor, Mecca ranks 17th in international visitors annually.