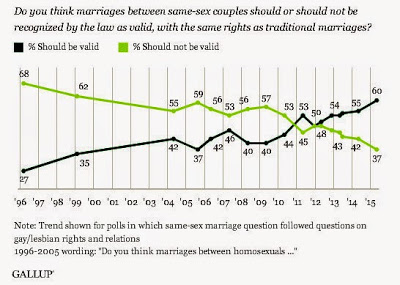 Sixty percent of Americans now support same-sex marriage, as the Supreme Court prepares to rule on its constitutionality next month. This is up from 55% last year and is the highest Gallup has found on the question since it was first asked in 1996. Public support for the legality of same-sex marriage first reached a majority in 2011, when 53% supported it. Since then, support has ranged from 48% to 55%. The five-percentage-point increase in this year’s Values and Beliefs poll, conducted May 6-10, is the largest year-to-year climb since 2011, when support rose by nine points. Support for the legality of gay marriages in the U.S. has been a fast-changing trend. Just two decades ago, only 27% of Americans backed gay marriage, while 68% opposed. By 2005, the percentage in favor had increased by 10 points to 37%, and by 2010 it had reached 44%.

Support among Republicans has climbed seven points to 37%.