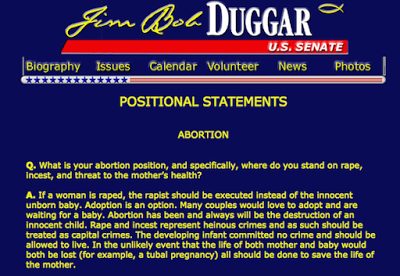 In a brief statement to People, Jim Bob and Michelle said last week that “that dark and difficult time caused us to seek God like never before.” Maybe that’s because Jim Bob publicly stated during his 2002 campaign for U.S. Senate that he thinks incest should be punishable by death. Jim Bob’s platform on his campaign website—preserved via web cache—states that he believes “rape and incest represent heinous crimes and as such should be treated as capital crimes.” Jim Bob offered this belief to explain his position on abortion (only acceptable if both the mother and the baby were going to die anyway, of course). Jim Bob lost the Republican nomination for Senate to Arkansas’ incumbent Senator Tim Hutchinson. His son Josh remained very much alive and went on to molest several underage girls including some of his sisters from 2002-2003.

During his single term in the Arkansas House, then state Rep. Jim Bob Duggar sat on the Corrections, Criminal Law, and Judiciary committees. Ahem.