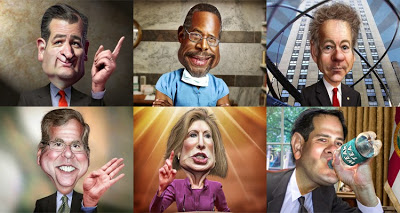 The first Republican primary debate will take place on Aug. 6 in Cleveland, the Northeast Ohio Media Group reports. The debate, sponsored by Fox News, will take place at the Quicken Loans Arena (or, “The Q”), home to the NBA’s Cleveland Cavaliers. The Q is also the site of next year’s Republican National Convention, which is scheduled for July 2016. Fox News is expected to formally announce the date and venue within the next few days. Spokespeople for both Fox News and the Republican National Committee did not immediately respond to requests for comment late Monday night. The RNC has sanctioned nine primary debates for the 2016 campaign, with the possibility of adding three more. It had previously announced that the first debate would take place in August in Ohio, though the exact day and location were unknown.

It’s possible that the above field of six will have doubled by the time of the Cleveland debate. They better have a big stage. The final GOP-sanctioned debate will be held on February 26th, four days before Super Tuesday.