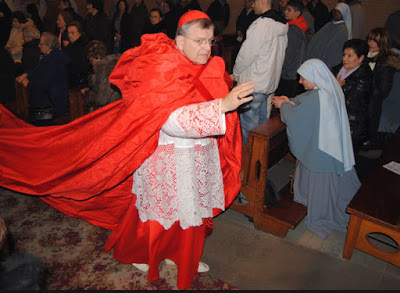 “I mean, this is a defiance of God. It’s just incredible. Pagans may have tolerated homosexual behaviours, they never dared to say this was marriage.” – Cardinal Raymond Burke, speaking Wednesday at Oxford University’s Newman Society. More from The Tablet:

Though the talk consisted primarily in an overview of Pope Benedict XVI’s chiefest intellectual contributions, Cardinal Burke adopted a more personal note in his answers to questions at the end. Responding to a question about the marginalisation of faith in the public sphere, he stressed the primary importance of fortifying the family in its understanding of how faith “illumines daily living”. ‘The culture is thoroughly corrupted, if I may say so, and the children are being exposed to this, especially through the internet.’ He told the audience that he was “constantly” telling his nieces and nephews to keep their family computers in public areas of the house so that their children would not “imbibe this poison that’s out there.”

PREVIOUSLY ON JMG: Burke says he would deny communion to pro-gay legislators. Burke gets booted from Vatican post after clashing with Pope Francis. Burke says families should not expose their children to their evil gay relatives.