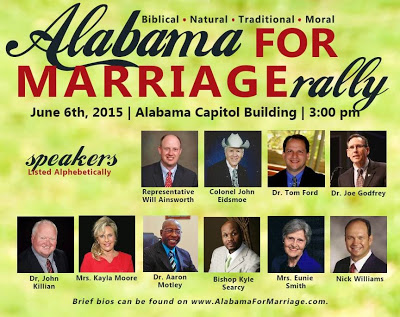 On his Facebook page Alabama Supreme Court Chief Justice Roy Moore is promoting the above anti-gay rally for which his wife and Foundation For Moral Law head Kayla Moore is one of the speakers. From the rally’s website:

Alabama! Be a voice for truth: Marriage = One Man + One Woman. God created it. Nature reveals it. Societies thrive on it. Children are nurtured by it. History affirms it. The Gospel is exemplified by it. Man doesn’t change it. Calling all pastors, churches, families and individuals to join thousands in Montgomery on June 6th, to send a united message to elected officials, the Supreme Court and the world: Alabama is for Marriage. As the U.S. Supreme Court prepares to rule on marriage in June, you have a duty to speak up while the very nature of marriage is being threatened. Devotion to Christ, love for your country and concern for your children demand immediate action.

Also speaking is FML senior counsel John Eidsmoe, who has called for America to impose “biblical law” and all of its punishments. Eidsmoe, not incidentally, was Michele Bachmann’s professor at Oral Roberts University.

Previous TRAILER: Being Canadian
Next The Chemical Brothers – Go