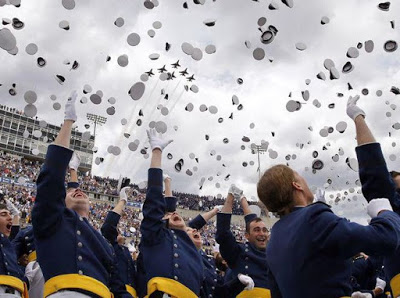 From the Colorado Springs Gazette:

The Air Force Academy class of 2015 is the first to come through four years at the academy with the open acceptance of gays and lesbians in the ranks. Tricia Heller, a 1987 graduate, and Tara Sweeney, a ’95 grad, attended the ceremony to support Lydia Hill of Boston. Heller and Sweeney helped found Spectrum, the Air Force Academy gay and lesbian support group, of which Hill was one of the first members. “We all served under ‘don’t ask, don’t tell,’ so it was important for all of us to be able to be open about who we are,” said Heller, a board member of the Blue Alliance, a support group for cadets. “For us, it’s been awesome to watch cadets like Lydia be able to serve openly.”